Feedback loops are the key to how EcoTipping Points work. EcoTipping Points set in motion a cascade of effects that reverse the vicious cycles responsible for environmental decline. The vicious cycles are transformed into “virtuous cycles” that propel the eco-social system toward sustainability. The ensuing proliferation of positive effects creates additional virtuous cycles that “lock in” the benefits. Environmental success stories point to the key ingredients that make it all happen.

EcoTipping Points are typically an environmental technology (in the broadest sense), coupled with the social organization to put it into effective use. They are catalytic. EcoTipping Points set in motion a cascade of far-reaching effects through the system.

However, far-reaching effects are not enough. The environmental success stories that we’ve analyzed tell us that the crucial action for both problems and solutions resides in feedback loops, circular chains of cause and effect that amplify small causes into large effects.

Feedback loops explain why vicious cycles are so hard to break. But they also expose the strategic points at which the cycles can be reversed. Like Aikido, the martial art that turns an attacker’s thrusts back on the attacker, EcoTipping Points can identify critical maneuvers for reversing the currents of ecological destruction. Instead of continuing to wear the system down, the same forces begin to build it back up.

EcoTipping Points transform the feedback loops (vicious cycles) responsible for environmental decline into virtuous cycles that power restoration. The examples below show how this happens.

This story is about urban decay and restoration in New York City’s Bowery District. A fiscal crisis in city government during the 1960s precipitated the negative tipping point: a reduction in services (e.g., police and fire protection) in the already depressed Bowery. A system of interconnected and mutually reinforcing vicious cycles was set in motion by the cascade of effects that followed:

The positive tipping point began in 1973 when a young artist named Liz Christy saw a small boy playing in a trash-filled, rat-infested vacant lot and she decided to do something about it. She organized some friends to haul out the garbage and truck in soil to establish the Bowery Houston Community Farm Garden.

At first skeptical, the mostly African-American and Hispanic neighbors began to pitch in, and within a few months they were taking home armloads of tomatoes and cucumbers. Besides displacing rats and drug dealers, and creating a much needed green space, the garden also became an “outdoor community center.”

As can be seen in the diagram below, the garden served as the EcoTipping Point that reversed the vicious cycles described above. The vicious cycles of the negative tip were transformed into virtuous cycles (shown in black below):

Once news of the garden’s success spread, an entire movement developed. Neighboring neighborhoods established gardens, and in 1978 the city parks department began the Green Thumb program which offered plants, tools, expertise, and $1-per-year leases to community groups. By the late 1980s New York City was home to over 800 community gardens. They even attracted international attention, with people from as far away as China and Sweden visiting to learn how to start community gardens.

Most important, new virtuous cycles “locked in” the benefits. When property values in neighborhoods with gardens increased, the city government tried to sell garden lots for development. However, the pride and commitment of neighborhood residents, as well as experience and organizational capacity they acquired in the course of developing the gardens, enabled residents to take on the city bureaucracy, consolidating the legal tenure of the gardens.

Read this story as it appeared in World Watch Magazine.

Read the full story of Community Gardens in New York in the EcoTipping Points in-depth article.

The negative tipping point occurred throughout the Philippines with the introduction of destructive fishing methods such as dynamite, cyanide, and small-mesh fishing nets after World War II. Two interlocking and mutually reinforcing vicious cycles were set in motion:

The downward spiral of destructive fishing, habitat degradation, diminishing fish stocks, and fishing further from home continued until many places were virtually worthless for fishing.

“Lock in” to sustainability came with the formation of additional virtuous cycles: 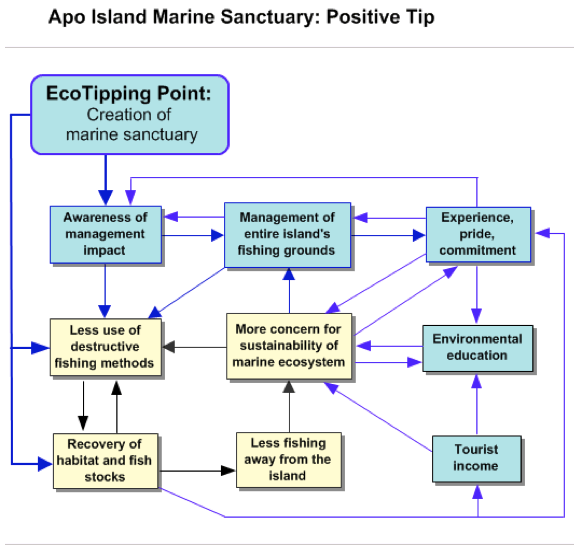 Read this story as it appeared in Journal of Policy Studies.

Read the full story of the Apo Island Marine Sanctuary in the Philippines in the EcoTipping Points in-depth article.

The negative tipping point in this story was commercial logging concessions granted by the rajahs shortly before India’s independence. A system of vicious cycles was set in motion by the ensuing cascade of effects:

As can be seen in the diagram below, the four vicious cycles listed above were interconnected and mutually reinforcing. The end result was disappearance of the johad and loss of the local water supplies and village forests. Women and children were cast into a nightmare of walking long distances to collect water and fuel wood. Children had no time for school, and women had little time for other family responsibilities and economic activities.

The positive tipping point was the restoration of a single johad in Gopalpura village, along with restoration of the traditional gram sabah village council to manage it. The ensuing cascade of effects reversed three of the feedback loops in the negative tip, transforming the vicious cycles to virtuous cycles:

The virtuous cycles continued until all village wells were flowing and the village locked into a sustainable water supply. Women and children no longer had to spend long hours getting water and fuelwood. Children returned to school and women returned more attention to family and economic activities. A new virtuous cycle was set into motion when people from other villages heard about the success in Gopalpura and came to see what happened. Johad spread to hundreds of villages.

Read this story as it appeared in World Watch Magazine.

Read the full story of the rainwater harvest in India in the EcoTipping Points in-depth article.

The negative tipping point came in the early 1980s with the introduction of cotton farming that included chemical pesticides as an integral part of the production package. Insect control with chemical pesticides proved unsustainable. The farmers descended into a downward spiral of pesticide poisoning and debt:

The positive tipping point was the introduction of Non-Pesticide Management based on neem and an assortment of other ecological insect control methods. It started in Punukula village. The vicious cycle involving resistance to chemical insecticides disappeared. The ensuing cascade of effects reversed the other two feedback loops in the negative tip, transforming the vicious cycles to virtuous cycles: 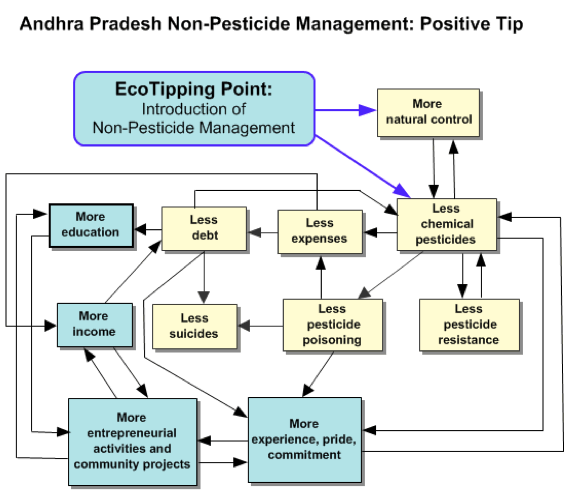 Read this story as it appeared in The Ecologist.

Read the full story of escaping the pesticide trap in India in the EcoTipping Points in-depth article.

The positive tipping point was the establishment of community mangrove management, which reversed the vicious cycles, transforming them into virtuous cycles:

It was a time when farmers from Northeast Thailand were moving into this relatively uninhabited region, seeking a better life. Commercial logging concessions opened up new land for farming, accommodating landless families and a growing population. The process was accelerated by expanding domestic and foreign markets for timber, rice, maize, and cassava, accompanied by government policies that encouraged agricultural exports in order to increase government revenues.

Nakhon Sahon seemed a land of opportunity, but soon the landscape and the community were caught in a downward spiral that threatened to close off the prospects for a better life the settlers had sought. It happened because of a chain of events initially set in motion by expanding markets for timber and cash crops (see diagram below):

The result was an interconnected system of mutually reinforcing vicious cycles that drove the landscape and the community into progressively greater decline.

The positive tipping point was the introduction of agroforestry and establishment of a community protection forest accompanied by a process of community dialogue and problem solving that enabled successful implementation.

Maintaining a protection forest as an integral part of the landscape provided:

Reversal of vicious cycles in the negative tip transformed them into virtuous cycles that fostered and sustained a healthier and more productive landscape and an economically and socially healthier community.

Read the full story of agroforestry and community forests in Thailand in the EcoTipping Points in-depth article.