Donate to this project. Help to free more communities from mosquitoes, Zika, and dengue fever.

For years, Aedes aegypti mosquitoes and dengue fever were a regular part of life in Monte Verde, a humble peri-urban community in Honduras. Then, in 2016, Monte Verde was overrun not only with dengue but also with Zika and chikungunya. All of these diseases were transmitted by Aedes aegypti. Desperate, and with help from a nonprofit organization, the community embarked on a pioneering effort to get rid of the mosquitoes and the diseases. Monte Verde residents used biological control with copepods, baby turtles, and tilapia fingerlings, all of them highly effective predators of mosquito larvae, to prevent mosquito production in wells and containers such as small cement tanks and plastic drums used to store water for household use. While biological control involved virtually no cash expense, it did require full community participation to ensure that it worked. The key was a small team of community volunteers, who worked with their neighbors to achieve success. After more than a year of experimentation, working out the details of how to do it, and overcoming numerous technical and social obstacles, Monte Verde volunteers and residents crafted an environmentally friendly mosquito eradication toolkit that works effectively and sustainably. Mosquito production from wells and water storage containers is now zero. Most important, there have been no cases of Zika, dengue, or chikungunya since the beginning of 2017. Monte Verde can serve as a model for extending the same success to other communities.

A single species of mosquito (Aedes aegypti) is one of the most serious health threats on the planet. It’s responsible for Zika, dengue fever, chikungunya, and yellow fever. Since the World Health Organization’s global DDT campaign to eradicate mosquito-borne diseases collapsed in the 1970s, dengue fever has increased to hundreds of millions of cases worldwide each year, with half-a-million children hospitalized annually because of life-threatening complications, and 20,000 fatalities. Chikungunya, Zika, and birth defects due to Zika have spread through Latin America in recent years. 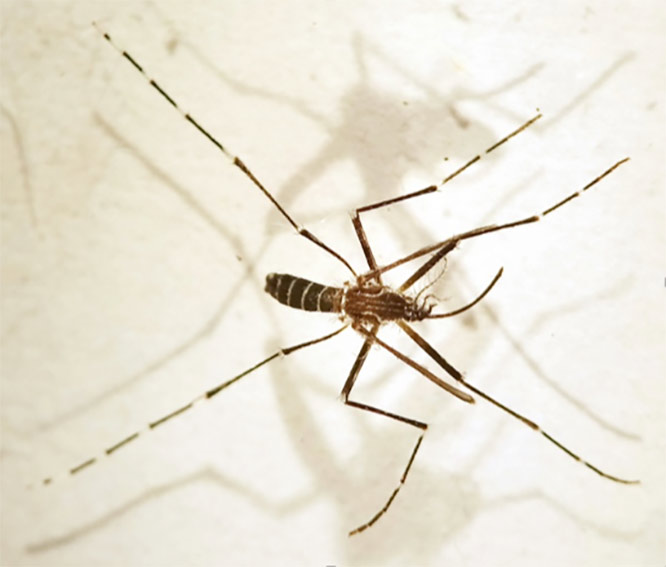 The Aedes aegypti mosquito, which is responsible for Zika, dengue fever, chikungunya, and yellow fever, has a characteristic “lyre” design on its back.

Because there is no vaccine for these diseases (except yellow fever), the only way to control them is by going after the mosquito, but there has been little progress despite hundreds of billions of dollars spent worldwide on insecticides over the years. In fact, it’s getting worse, and with Global Climate Change, the diseases threaten to spread from the tropics into North America and Europe. Large sums of money are now being spent on developing genetic engineering approaches such as GMO mosquitoes. We don’t know how effective these new methods will be, but we can be sure that they will be expensive.

Is there another way? The pioneering success of Monte Verde, a community of 350 houses in the municipality of Choloma, Cortés, near San Pedro Sula, Honduras, has shown that the answer is “Yes!” Monte Verde has used biological control with predators of mosquito larvae to wipe out the mosquitoes and free its residents from the diseases. 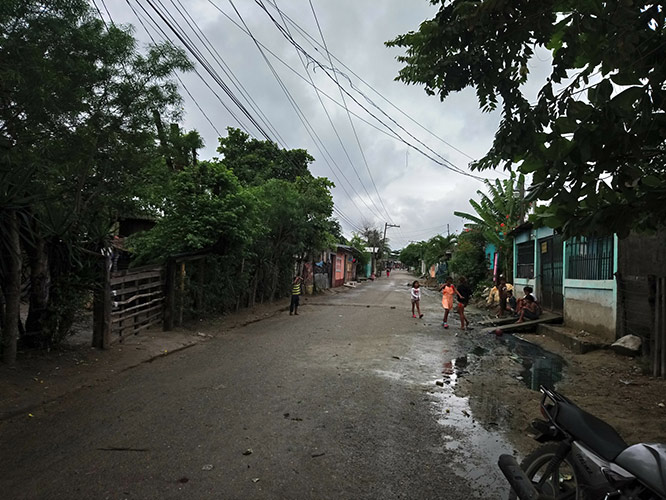 Like many poor and neglected communities in Latin America, Monte Verde does not have a continuous piped water supply. In fact, the community’s makeshift water system delivers water (for household cleaning and cooking, but not for drinking) to each house for only a few hours each week. Every household must have a large number of water storage containers – such as small cement tanks (known as pilas), 50-gallon plastic drums, and 5-gallon buckets – in order to have water for the rest of the week, and these water storage containers are where the mosquitoes breed. 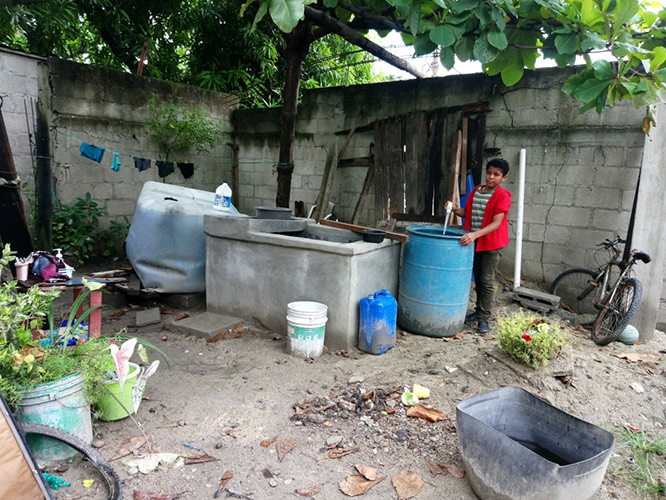 Water storage containers (from left to right): plastic tank (cisterna) with bleach bottle on top, cement tank (pila), white bucket (cubeta), plastic drum (baril). Clothes are washed on cement washboards like the one at the left side of the pila. The boy is a Monte Verde volunteer checking for mosquito larvae in the plastic drum.

For years, Aedes aegypti mosquitoes and dengue fever were a regular part of people’s lives. However, after suffering hundreds of cases of dengue, chikungunya, and Zika during 2014-2016, Monte Verde embarked in 2016 on an effort to eliminate the transmission of these diseases by getting rid of the mosquito. The project was facilitated by a small team from the nonprofit organization Operation Blessing Honduras.

Monte Verde’s inspiration for biological control came from Vietnam, which is the only place in the world known to have dealt effectively with the Aedes aegypti mosquito in recent decades. During the 1990s, 100,000-300,000 children in Vietnam were hospitalized each year with life-threatening Dengue Hemorrhagic Fever. Motivation was strong when the Vietnamese government developed a multi-method package for community-based Aedes aegypti and dengue eradication, launching a massive campaign in the mid-1990s to get the package into villages and urban neighborhoods across the nation. It took years to finish the job, but the results have been impressive. The mosquitoes and dengue fever have disappeared completely from northern Vietnam, and they are dramatically reduced in the rest of the country (see the full story about Vietnam’s eradication of the Aedes aegypti mosquito with biological control).

Tiny crustacean predators known as copepods are at the core of Vietnam’s Aedes aegypti eradication package. Despite their small size (less than 2 mm in length), copepods are like great white sharks for mosquito larvae (see a one-minute video of copepods in action against mosquito larvae). 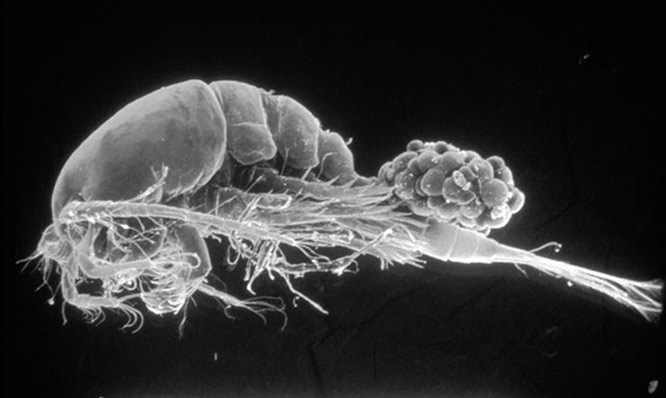 Copepods are voracious predators of newly hatched mosquito larvae and other aquatic animals up to twice their size. This female copepod with egg sacs is about 1.5 millimeters in length.) Photo: Michael Brown. 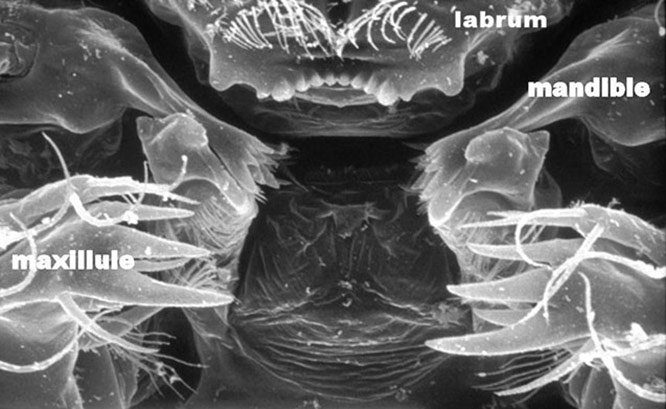 Close-up of a copepod mouth, which takes in mosquito larvae like a wood chipper (see video). Photo: Michael Brown.

While common in aquatic habitats around the world, copepods don’t normally get into wells and water storage containers on their own. However, copepods collected from natural aquatic habitats can be cultured and introduced into water storage containers, where they multiply to such large numbers that they consume virtually every mosquito larva that hatches into the container. The copepods take care of themselves and survive in a container for as long as there is water. They don’t depend on mosquito larvae for their food supply because they eat a great variety of small aquatic animals in addition to mosquito larvae.

Biological control is effective, environmentally friendly, and sustainable. It costs almost nothing except a heavy dose of community participation to ensure that every household does what is necessary for the biological control to work. Monte Verde’s strategy was to adapt Vietnam’s biological control strategy to the ecological and social conditions in Honduras. 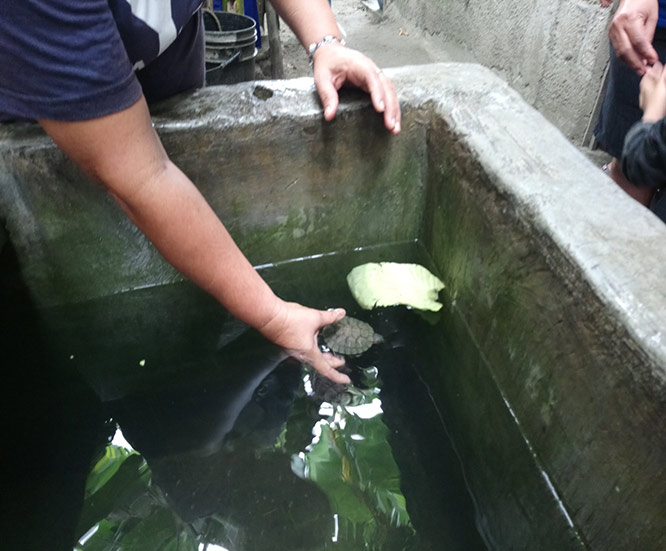 A baby turtle (Trachemys scripta) in a cement tank with cabbage provided as food. The turtles are family pets that live for years. They can be moved from one water storage container to another as needed.

The Monte Verde project began in 2016 with educational meetings held by Operation Blessing Honduras staff to inform people about:

A very important outcome was the emergence of a core of approximately 10 community volunteers. These volunteers have been a key to success, working with their neighbors to put biological control into use at every house. They visit every household at least once a month to check for mosquito larvae and see how the mosquito eradication methods are being used. For monitoring purposes, a volunteer records the number of mosquito larvae or pupae that are seen and discusses with the family how to improve what it is doing. 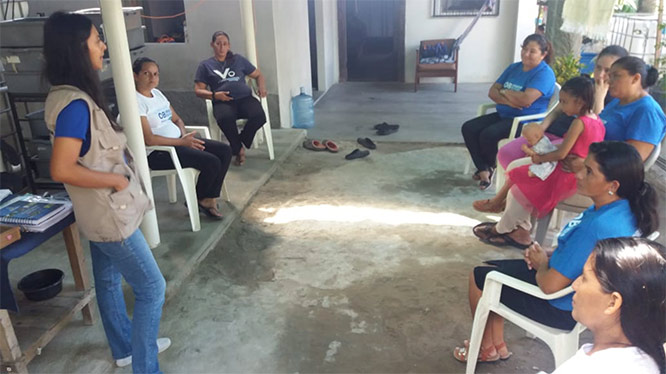 Meeting of Monte Verde volunteers. The volunteers, mainly local housewives and mothers, include some men and boys as well.

It took more than a year of hard work and experimentation for the people of Monte Verde to flesh out the details for using biological control effectively, refine the process with the community, and craft the biological control into a sustainable solution. During this time, the mosquito eradication toolkit expanded beyond biological control to include measures such as getting rid of unnecessary water storage containers, replacing difficult-to-manage containers with containers more receptive to mosquito control, and the use of environmentally friendly larvicides to provide temporary, stopgap suppression of mosquito production when other methods were falling short. More information about the larvicides employed in Monte Verde.

The following is a brief description of how the toolkit has worked out:

The road to success

While there were numerous challenges and even serious setbacks during the first eighteen months of the project, the entire system was working smoothly enough by the beginning of 2018 for the mosquito population to decline month after month during the year. There is now no mosquito production whatsoever in Monte Verde’s wells and water storage containers, a striking contrast to the 43,218 larvae and pupae counted in Monte Verde’s water storage containers during a “snapshot” baseline survey in the middle of 2016 when the project began. 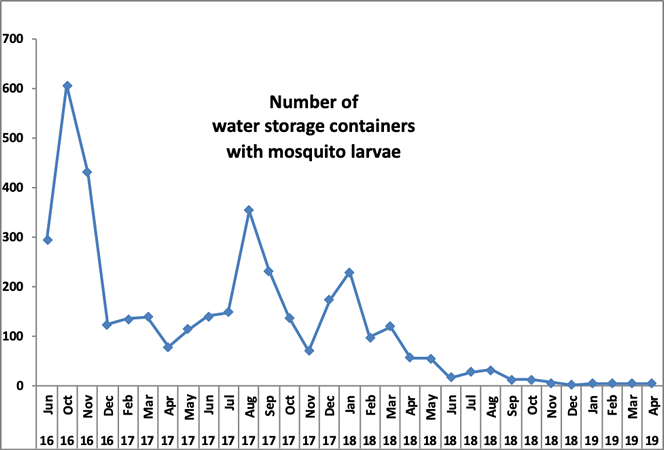 The impact on the diseases has been equally dramatic. There have been no recognizable cases of dengue fever or Zika in Monte Verde during 2017-2018, and the last chikungunya case was in April 2017. 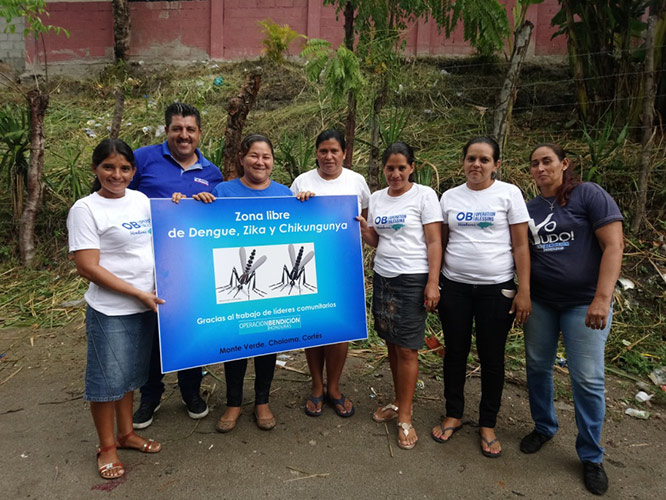 Monte Verde volunteers with a sign declaring Monte Verde to be a dengue, Zika, and chikungunya free zone.

We are not personally aware of this kind of success eradicating the Aedes aegypti mosquito elsewhere in Latin America on any scale, large or small, since the collapse of DDT 40 years ago. Monte Verde’s success is an inspiration for thousands of similar communities to do the same. We don’t have to depend on high-cost solutions to get rid of the mosquito and the diseases at a local level. And it’s not necessary to wait for government. Local communities can do it for themselves if they just receive some help to get started.

The Monte Verde project is now ready for a new phase. The time has come to publicize the “Monte Verde model” and what it has accomplished, so biological control and its benefits can be offered to others. Monte Verde can serve as a demonstration site to show how to do it. It could also be a producer and provider of native copepods, native turtles, and tilapia fingerlings that other communities will need to embark on their own Aedes aegypti eradication.

The pivotal role of the volunteers in Monte Verde’s story highlights the importance of developing a strong team of volunteers at each new location. Monte Verde’s volunteers started out as ordinary residents of a mosquito-plagued community. Now they are citizen scientists with expertise in mosquito eradication by biological control and a commitment to continue improving the effectiveness and sustainability of the mosquito eradication toolkit for their community. The volunteers have developed a wealth of practical knowhow and experience with community organization for Aedes aegypti eradication. This ability will enable them to serve as “educators” assisting other communities with the necessary training. The consequence can be a cascade of local community empowerment for achieving a healthier life.

What lessons does the Monte Verde story offer to help other communities free themselves from the diseases transmitted by Aedes aegypti? Why was Monte Verde so successful? What was the “lever” that propelled Monte Verde from being overrun with mosquitoes and disease to getting rid of both?

The “lever” had two major components:

Participants in this story

Three larvicides, all of them completely harmless to people and pets, were tested in Monte Verde: